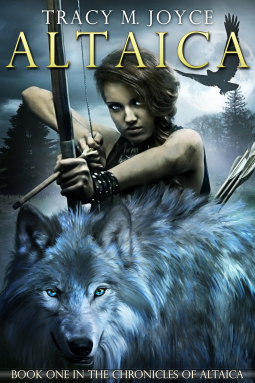 Altaica by Tracy M. Joyce is the first in the Chronicles of Altaica series. I received this from the publisher, Odyssey Books, through Netgalley in exchange for an honest review.

“Look at her – she’s Hill Clan. Even the Matyrani don’t like them …”

Isaura – little is known about her race, but much is whispered. Born to refugees, she grows up enduring racism and superstition within a community that fears her. She has few friends, and those she treasures. Trapped, she longs for escape to a different life.

Escape is only the beginning of her troubles. Having fled an invading army with her friends, Isaura is faced with heinous choices in order to survive. Secrets from her past emerge to torment her and threaten to destroy all she holds dear. Her struggles forge a bond with an ancient power – a power which may transform or consume her. Old hatreds and superstitions are renewed and at her most vulnerable she learns the true nature of those around her.

Her only hope lies in a foreign land – a land rich in tradition; ruled by three powerful clans. A land with a history marked by warfare; where magic as we know it does not exist. Instead what is here, in abundance, is a more primal power.

The Good: Everything. A brilliant, wide cast of characters, unique, rich world, and interesting, exciting plot. I’ve read a lot of fantasy and this was a nice break from the usual canned storyline. Though Isaura was a good protagonist, I found myself attached to and invested in a number of other characters–there were plenty I thought could have been the protagonists themselves. I tore through this book, page by page, and my only regret is that I read it so fast, and I have to wait so long until the next one!

The Not-So-Good: I had a hard time with this one–there really wasn’t much I didn’t like. Only thing would be a couple of the subplots and characters felt a little juvenile, like petty teenager drama. Contrasted against a complex world and storyline, it didn’t seem to fit for me.

My Favorite Part: I love Asha’s character, and Unmiga and Pio made me laugh aloud on several occasions. The end scene was beautiful and breathtaking–I also loved the tenderness between Karan and Isaura–and I can’t see where Joyce takes this story next.

The Verdict: Altaica left me speechless. It is a brilliant YA epic fantasy, definitely among the best I’ve read. There are many characters to love, a rich and believable world, and unique and interesting plot. If you love fantasy, you need this book in your life.